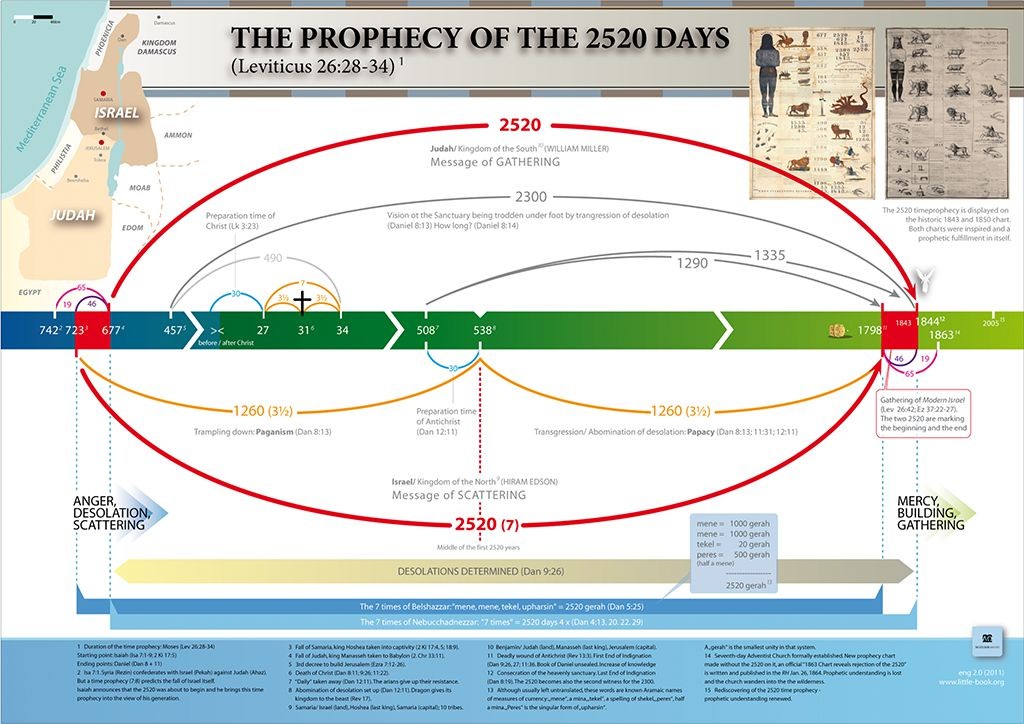 “The experience of the disciples who preached the “gospel of the kingdom” at the first advent of Christ, has its counterpart in the experience of those who proclaimed the message of his second advent. As the disciples went out preaching, “The time is fulfilled, the kingdom of God is at hand,” so Miller and his associates proclaimed that the longest and last prophetic period brought to view in the Bible was about to expire, that the Judgment was at hand, and the everlasting kingdom was to be ushered in.” The Great Controversy 1888, pg 351

The longest and last prophetic period brought to view i the Bible is not as most people believe, the 2300 day prophesy.  Miller correctly believed that there was a 2520 year prophecy given in Leviticus 26.  It is given four times in that chapter, thus showing the importance of this particular prophecy.  It is given as the result of Israel’s failure to follow God’s laws and contains almost all other time prophecies given in the Bible, including the 2300, the 70 years of Babylonian captivity and the 1260 years of wilderness wandering leading up to the Millerite time period.  This time prophecy is on the original 1843 chart, the Ellen White tells us was as God wanted it.  It was also on the 1850 chart that corrected the error on the original.

As outlined by this chart, there were two 2520 year prophecies, one against the Northern 10 tribes of Israel and one against the Southern two tribes of Judah and Benjamin.  They have significantly different meanings and we would do well to prayerfully study them both.  This chart is an invaluable visual aid for this study.

View all posts by littlebook